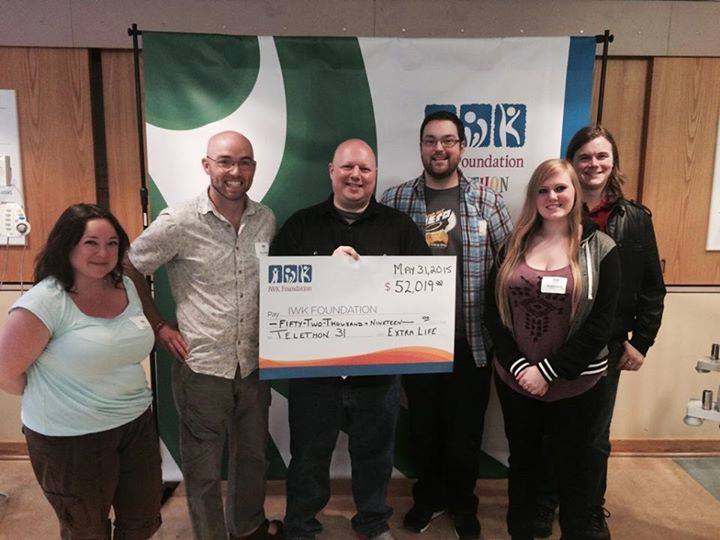 “But I was always a big fan of video games, and spent an inordinate amount of time playing Pac-Man, Dodge ‘Em and Combat with my brother on our Atari 2600.”

“I concentrate mostly on Extra Life, though I also supported Operation Supply Drop this year.”

“I’ve been truly blessed in that I’ve been able to turn my hobby into my living, first as a member of the enthusiast press and then as a game developer. Through all of that I’ve also managed to gain a bit of notoriety thanks to the Player One Podcast, which has been running for about nine years now.

About six years ago, fellow podcaster and all-around fantastic human being T.J. Lauerman (ThatSportsGamer) approached me about joining his Extra Life team. I checked out the charity and really liked what I saw. Especially the fact that I could support my local children’s hospital, the IWK Foundation, but still raise funds on an international level.

Gaming has been so good to me – allowing me to make a living and meeting some of the best friends I’ve ever had. I realized then that I had the ability to give back, and I’ve been hooked ever since.”

“I promote it mostly through social media and my weekly show, the Player One Podcast. Each year I try to set some sort of theme (either Sega or retro game related, usually), and give people the chance to dictate the games I play during my marathon by donating $25 or more.

In the past couple of years I’ve also begun raffling off prizes in the hopes of driving more donations. This is done through the amazing generosity of regular donors, as well as various companies, Sega in particular.

I’ve also had a bit of success promoting my campaign through twitch. It’s quite exciting to have a donation come in while you’re playing live. It also opens up the opportunity to drive donations in real time. Sometimes your audience will ask you to perform certain tasks in a game in exchange for a new donation.”

“As a father it’s very rewarding to be able to support my local hospital while doing something I love. And the journey since I started six years ago has been amazing.

I’m now the president of the local Extra Life guild. We spend our time thinking of new ways to recruit new fundraisers to the cause. Even better, I got to present the official Extra Life cheque to our hospital during their yearly telethon in 2015. Handing over $50,000.00-plus was an amazing feeling.”

“I play in the name of my kid brother, Brad, who died of leukaemia in 1983 at the age of three. He spent the better part of his short life in the hospital. Even today, over 30 years later, simply saying his name around my parents is enough to reduce them to tears.

No parent should ever have to bury a child. And I play because it’s the least I can do to help us get to a place where that never happens again.”

Thank you Greg! You can support Greg and his endeavors with Extra Life on his participant page. Are you a Big Hearted Gamer? We would love to hear from you! Strike up a conversation with @bigheartedgamer on Twitter.