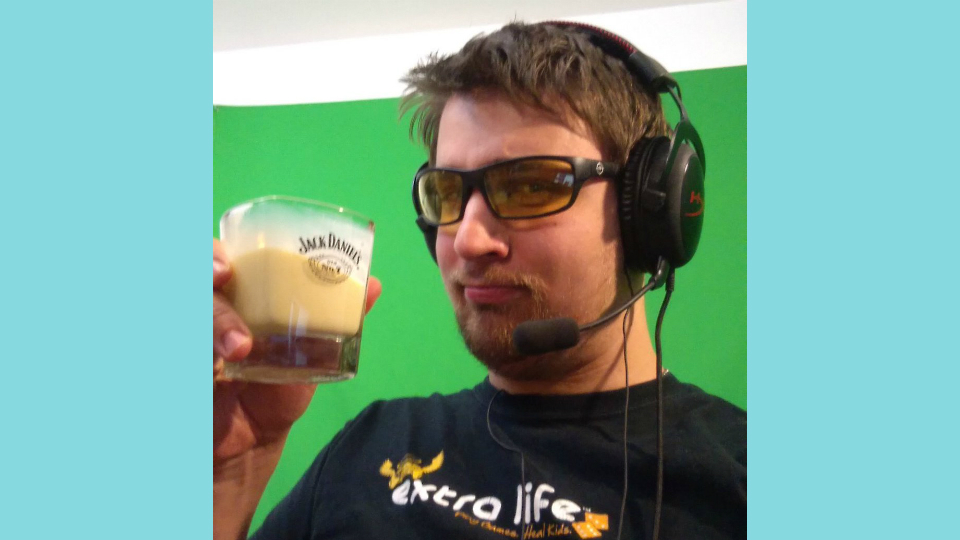 “It was probably the first game I ever played (and beat), Legend of Zelda: Link to the Past on the SNES. I remember accidentally deleting my dad’s save file (I was probably like 4 or 5), and being grounded from the game for what seemed like forever. At night, I would sneak down into the basement and play, and I remember being so tired the next morning, but so satisfied because I had found a new item, or beaten a new boss. And that’s probably where my love of video games began.”

“I volunteer with Extra Life, which helps raise money for Children’s Miracle Network Hospitals in the U.S. and Canada (I play for Helen DeVos Children’s Hospital in Grand Rapids, MI).

I also play for Stack-Up.org, a new charity which sends video game care packages to U.S. and N.A.T.O. troops stationed around the world.

Finally, I play for Gaming for Adoption, which raises money to help offset the cost of adoption for couples here in the U.S.”

“While not a ‘charity’ in a monetary sense, once a week, a volunteer as a mentor at the local elementary school. It’s a Big Brother/Big Sister-esque program.”

“I actually can’t remember “the moment” where I discovered my first gaming charity, but I started working with Child’s Play in 2010, and at the time, it was just a time killer. It was something that I could do while I was playing video games, and it didn’t really cost me any time or effort. In 2012, a friend via Child’s Play told me about Extra Life, and I kinda hopped over and played with them for a while. I got really excited about Extra Life, because it was the first time I ever really had to put work into making a difference for a charity, and it felt amazing to see that work materialize into actual change. I would play for Extra Life every year on their official game day, but it wasn’t until early 2015 that I became president of the Grand Rapids Extra Life Guild. It was then that I decided that this is what I wanted to do with my life. I remember, as a kid, people always telling me to put the controller down and go and do something productive with my time, and Extra Life became my jumping-off point for turning my passion into something good for the world.”

“Other than the typical giveaways, endorsements, and social media campaigns, I’ve recently taken extra steps to promote the charities I work for in creative ways, such as applying a handmade Stack-Up.org wrap to my vehicle in the new Need For Speed. I’ve also used my experience as an art student to create unique and interesting graphics, motion art, and interactive designs promoting charities, as well as overlays and panels for streamers such as myself.”

“I’d say that the best thing I’ve pulled from all these charities are the people I’ve met. I’ve met some of my best friends through these charities, and I can’t imagine life without them. The feeling of camaraderie from pulling together with these people and becoming a huge force for real, tangible good is something that I’ve been hard pressed to find anywhere else in life.”

“I remember back in 2013, a few months after the Extra Life 24-hour marathon, an email popped into my inbox from a woman who’s daughter had been admitted to Helen DeVos Children’s Hospital. She described to me the struggles of having her daughter bedridden during the holidays, and how heavy the emotional and financial toll was. The email did have a happy ending, however. With help from the fantastic doctors at the hospital as well as the financial and moral support from Extra Life, her daughter was able to come home that spring.”

“I think one of the particulars joys of doing all of this for charity is being able to help myself alongside of it. I remember when I actually started gaining a growing fanbase on my Twitch stream. It felt really good to actually have people watching, wanting to help those in need as much as I did. I was able to turn my stream into a working business model without compromising what I stood for, or lessening the impact of the charitable causes I was a part of.”

Thank you Adam! You can support Adam and his endeavors with Extra Life on his participant page.