Exergaming, we’ve all heard of it, right?  Exercising while gaming? C’mon! Who doesn’t exercise when they game?!  While some of us may exercise our lungs and our capacity for thinking up new ways of harassing our opponents, most of us don’t really work up too much of a sweat while gaming. Carrie Swidecki is an exception to this general statement. 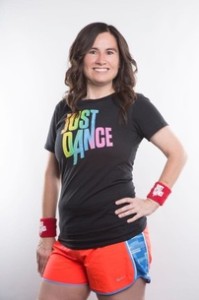 Between July 11 and 17, 2015, Carrie will will be attempting to set the overall longest video game marathon of all time World Record by Just Dancing 140 hours on Just Dance 2015 at Otto’s Video Games and More, a national charity event that will be live streamed!  This is a community world record with local businesses, organizations, and 150 volunteers coming together to make a difference in children’s lives at a national level!

How can she do that, you ask?  Carrie has teamed up with the Children’s Miracle Network for her 140 hour world record on July 11-17, 2015 at Otto’s Video Games and More in Bakersfield, CA. Carrie and Children’s Miracle Network both share the same goal of seeing children reach their fullest potential, be it physically fit or at their healthiest, so they can achieve their personal dreams. Carrie feels honored to share her personal story and her fight against childhood obesity to make an impact on children’s lives at a national level. Carrie says that she “can’t think of a better way to celebrate 15 years of Exergaming, chasing a dream that changed my life, and my 39th birthday than setting a 140 hour world record that impacts children’s lives in ways that I never imagined that dance video games could.”

Carrie admits that she knows full well the power of video games, because they personally changed her life. 15 years ago she was 210 pounds, plus size 18-20, and living her life in the past. Then she discovered Exergaming. While chasing a dream of 3rd place in a local Dance Dance Revolution tournament she lost 75 pounds and 10 sizes. She went on to become an advocate, fighting against childhood obesity and a multiple world record holder.

Carrie has dedicated all of her world records to fighting childhood obesity. She currently runs 3 Just Dance Programs to fight childhood obesity at Sandrini school where she teaches 2nd grade: The 2nd grade physical education program, Just Dance Lunch time intramural program, and the Presidential Fitness Program with the after school program. Carrie has been involved in 6 local Just Dance events in the past 2 years that have raised over $60,000 dollars for the Children’s Miracle Network! Carrie’s advice to us all: “Never Give Up On Your Dreams!

At 38 years old and having survived obesity Carrie never imagined she would be setting the world standard for Exergaming with 7 marathon and 101 high score world records! If Carrie succeeds with 140 hours she will become the first person playing a physical moving game to hold the overall longest video game marathon World Record – this includes all video games! The current record is 135 hours of play with Call of Duty 2. Carrie is going to attempt to set 3 World Records at the same time!

Carrie’s attempt to set a 140 hour world record will be live streamed on: www.twitch.tv/extralife4kids

The official trailer for her attempts can be found here: http://youtu.be/KCqIam5o-Mk

If you are inclined to donate towards this worth cause, please head over to the official donation link for the Children’s Miracle Network: http://www.extra-life.org/index.cfm?fuseaction=donorDrive.participant&participantID=149553

Carrie looks forward to setting these new records and to your help!  Remember: Never Give Up On Your Dreams!