“The first video game that I ever played was Super Mario 64. In what was probably the coolest Christmas ever, I was given a Nintendo 64 and a copy of the game by my dad. Playing a video game for the first time was of course a hugely formative experience, but Super Mario 64 introduced a whole world filled with adventures that I still enjoy playing through to this day. Needless to say, it didn’t take long for me to be hooked.”

“My charity of choice is Extra Life, which is a fundraiser for Children’s Miracle Network. This year was my 4th year in a row participating in Extra Life, and it gets better every single time. As an added piece of excitement, this was also the first year that my city was given its own Extra Life Guild, and I was fortunate enough to be elected president of said guild. As great as this year’s been for us, we’re already talking about ideas for next year to ensure that we keep this great momentum going. Never a dull moment!”

I’m a proud ally for LGBT inclusion and am a regular donor to the Human Rights Campaign (HRC).

“I have my friend Justin to thank for getting me interested in Extra Life back in 2011. My first Extra Life marathon was with him and about 10 other strangers in a 24-hour LAN party. That 24 hours was filled with countless great games, tons of great food, lots of laughs, and an abundance of sleep-deprived memories that we still joke about to this day. I’m happy to say that each of those strangers are now some of my closest friends, and it served as an excellent introduction to Extra Life. Even though we didn’t raise much money that year, we’ve exceeded our goal every year since then, and I’m always doing my best to try to think up new ways to encourage fundraising. We enjoy making it into a big event each year, and it’s always 100% worth all of the hard work that goes into it.”

“A few weeks before my first Extra Life marathon in 2011, I created a silly ‘commercial’ advertising for our fundraising group. It didn’t generate much buzz, but it was a fun thing to throw together. I made goofy videos that were fairly similar for the next two years’ Extra Life marathons, but I put a bit more time and energy into each one instead of throwing them together at the last minute. And then last year I tried something different where instead of creating an entirely new video advertising the marathon, I created 8 smaller videos that were composed of highlights from our recorded 2013 marathon’s game footage.

I released one video a week for the 8 weeks leading up to the Extra Life Game Day, encouraging viewers to share the video and to possibly donate if they were feeling generous. It was a lot of work to put together, but it was a great way to advertise for the group along with giving us a great way of looking back on the previous year’s festivities. I’m hoping to do something similar using this year’s footage for the 2016 Extra Life marathon.”

“Of course the camaraderie in attempting to stay up for 24-hours straight with a group of your friends is a big draw, but I would say that the most rewarding part of participating in Extra Life doesn’t happen until the very end of the year when they tally up the total amount of Extra Life donations that were raised for Children’s Miracle Network hospitals around the country.

Each year that number keeps climbing higher and higher, and it is a growing testament to the amount of good will that the gaming community is capable of. I recognize that gaming is still a relatively new entertainment medium, and it probably has quite a bit to go before most will see it on equal footing when compared with music and movies. But charity organizations such as Extra Life are an excellent way to demonstrate what a difference that gaming can make for the forces of good.” 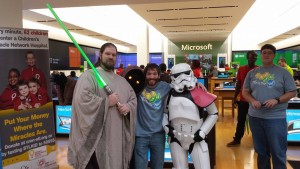 “I would point to what was probably around the halfway-mark of this year’s 24-hour gaming marathon for Extra Life. Over the course of a few short hours, I had several close friends join me in my Twitch channel’s chat to tell some jokes, offer encouragement, and even drop in a few donations while they were at it. I even had a few friends drive all the way out to visit me in-person, with a few of them also donating once they got back home.

One friend in particular blindsided me with a $100 donation that is still nothing short of mind-blowing. To see this huge influx of support and encouragement from so many of my friends all within such a short time frame was an immensely emotional moment for me, and I still have a hard time finding words that even come close to properly articulating my gratitude. I also find it incredibly validating to see so many of my friends on-board with the work that I do for Extra Life. I see it as an excellent incentive to keep doing what I’m doing and to work even harder to make next year’s Extra Life as good as it can possibly be.”

“Each year’s Extra Life marathon brings with it its own slew of memories that I’ll always cherish, and this year’s was no different. I think this year’s highlight would have been when I played through Octodad: Dadliest Catch while streaming on my Twitch channel.

Of course the game is already goofy and silly, but being that I started the game somewhere around the 16 hour mark of a 24-hour marathon meant that I was in that particular mental valley of sleep deprivation that made the game so funny that I had to pause the game several times to wipe the tears from my eyes after laughing so hard. I made sure to save that playthrough as a ‘highlight’ on my Twitch channel so that I could re-watch in all of its silly glory.”

Thank you Alex! You can support Alex and his endeavors with Extra Life on his participant page.