“Ever since I can remember I have always been around video games. When I was little I remember playing on the NES but most of my childhood was spent on the SNES, N64, and Gameboy. Having friends who were gamers also helped my passion by being to talk about it in school every day. It’s hard for me to pick just one game that turned me into a gamer because now I play a huge variety of games due to me being a collector of games. But if I have to think back to my childhood and think about what game I spent time on the most and had the biggest influence as a kid then I must say The Legend of Zelda: Ocarina of Time” 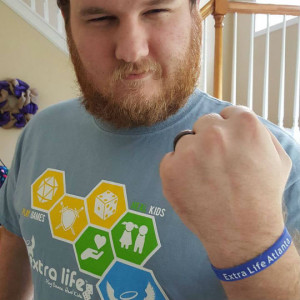 “I am a huge supporter and very passionate about Extra Life. I started raising money for Extra Life in 2013 and fell in love with the idea that I can play games to help kids. I started out small back then but now I have worked hard to help bring awareness about Extra Life and get others involved too! Because of this I am now the Vice President of the Atlanta Guild. Streaming has become a hobby of mine and I do all of that for Extra Life. I wish I could do more charities but I feel that instead of spreading myself thin across multiple, I can put all my efforts and focus to make a bigger impact in Extra Life. Of course I also support other charities by Humble Bundle and donating to AGDQ(Awesome Games Done Quick) or SGDQ (Summer Games Done Quick) yearly. “

“I have supported other non-gaming charities in the past. Recently I have decided that I wanted to get into running 5Ks more and usually those support other charities. “

“Several years ago, I found out that there was a community of speedrunners that beat games really fast for charity. Those were called AGDQ  and SGDQ. I was amazed on how the gaming community could raise millions for good causes. I told myself that I wanted to do this but I wasn’t good at speed running. Then I found out about Extra Life. I jumped aboard as soon as I can. What made it ‘the’ moment for me was now I finally can show the world that gaming can be used as a positive influence for others. I want to break down the stereotype and show that most gamers have a good heart and that instead of hearing the negativity all the time in the press that we want to hear the good side of gaming and all the positive benefits it provides.”

“I am dedicated Twitch live streamer and ‘network master’ as some call me. When I stream, I always promote Extra Life and I try to connect several other Extra Life streamers with one another. In my opinion, to have a bigger impact we all need to support each other and connect with one another. Because of this, our little community on Twitch and Twitter has grown as new friends are being made and in return everyone is helping each other promote their campaigns, including mine!

Another way I have promoted my campaign is by doing local events around my area. I have done several events and a few stores to help bring awareness to Extra Life as well as raise money. These events were anywhere from International TableTop day at a local game shop to Just Dancing at a Five Below retailer store. My team and I try to come up with creative ways to bring awareness to Extra Life and gain more members.”

“The biggest rewarding experience to me is being able to do what I love, playing games, and showing the world that it can be used as a positive influence. A lot of people still think gaming is a waste of time but I want to show them that there are so many benefits from gaming. Not only can we use them to help raise money for our children’s hospitals but they help develop skills and ways of thinking that other means cannot provide.”

“The biggest ‘Big Hearted Gaming’ moment I have had was just recently during our Just Dance event at Five Below. At a certain point about 8 or 9 hours in from dancing straight a guest came up to me. She said that she didn’t have any money to donate but she wanted to personally tell me that she is very thankful for what I was doing. For making a fool of myself to bring smiles to these kids faces. She said that she has not seen many people like myself using my spare time to help raise money for these kids.

After hearing that I knew what I was doing was making a difference. Even if I don’t raise a lot of money, my actions are being noticed and hearing those words from that person filled my heart with joy. And what made it better, she said that I was using video games as a way to bring happiness to others. ‘Thank you’ is all I need to hear to keep pushing as hard as I do, for the kids.” 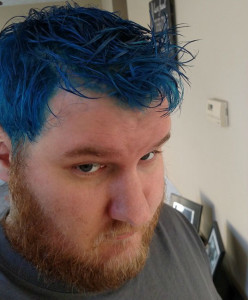 “I cannot define my success without the support from my friends, family, and now followers on Twitch and Twitter. Without those people who have been there for me as I live stream I would just be some guy talking to himself on the internet. I have made many new friends and their kind encouraging words have helped me to push harder for my goals. Just recently I reached one of the biggest goals that I set for myself. I raised over $1000 for Extra Life and now I have blue hair!”

Thank you Todd! You can support Todd and his endeavors with Extra Life on his participant page.