“Man, this is a tough one. I think my brother and I got Gameboys one holiday in 1990 maybe? I played Super Mario Land non-stop. That really hooked me as far as video games went, especially since I could play on the go! Add on Pokemon a few years later, on top of an SNES and that pretty much sealed the deal! Plus, there was this really cool space colonization game called Ascendancy for win95 and that definitely got me started on PC gaming for life!”

“There’s this really great charity called Extra Life that feeds into the Children’s Miracle Network of Hospitals. It allows gamers to show the world they are a force to be reckoned with by turning a hobby that many people don’t understand into something special for their own local communities by raising money for sick and injured kids at CMNH affiliated Children’s Hospitals. You game, you raise money, you directly impact kids in your own community. It doesn’t get any better than that!” 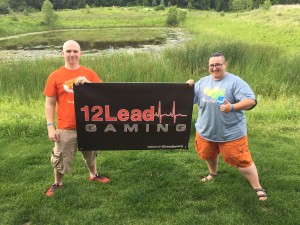 “Due to work, I’m pretty fortunate that there’s a lot of free time. I had just started streaming some World of Warcraft on Twitch when I saw an add for Extra Life on someone else’s page (sadly, I do not remember who). The logo was cool, so I checked it out, saw that my Lurie Children’s Hospital of Chicago was listed and was sold from there.

I work full-time as a paramedic and often transport kids to Lurie’s and have seen first-hand the amazing work they do with these kids AND their families. The staff is always so nice and prepared, so when I leave the kids, I know they’re getting the best care in the world. Joining Extra Life and raising money for them is the least I can do to help out some pretty brave kids.”

Social media has had a huge influence in my campaign. I blew past my goal in not time and set the bar higher, which I surpassed with my team. Sites like Twitter and Instagram allow you to connect with so many other people, and without it, I don’t think I’d’ve been nearly as successful.

Word of advice: use hashtags. We may gripe about them, but it’s seriously the easiest way to not only stay organized with your posts, but connecting with others is much faster!”

“Meeting other Extra Lifers, hands down. There are some really big hearted gamers out there that are simply inspiring to be around. Their positivity and attitudes have certainly made me strive to be a better person in general. I’ve made friends with other Chicago folks, along with people all over the country! Plus, we’ve gotten to run some awesome booths at conventions, which is always cool!” 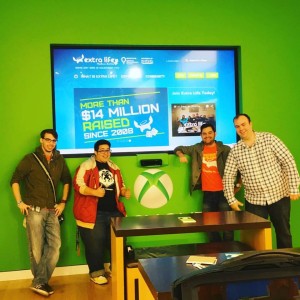 “When you hit that goal and you’re just like, “”man, we did it. That was an awesome journey… So next year, we should….!””

Yeah. That feeling of the future. What more can we do? How many more people can we get involved in this crazy gaming group of awesome? How much can we raise for kids in need?

Next year, dude. Next year is going to be even more awesome!”

“Planning and running a booth at Lake Count-i-Con this year with the 12Lead Gaming team. I honestly feared I’d bitten off more than I could chew… We not only managed to fill our 10×20′ spot and had people in the booth all day, but we hit our donation goal and I think everyone on the team just had one of those proud moments. It was a victory for our little group, but it’s one we won’t be forgetting any time soon.”

Thank you Joey! You can support Joey and his endeavors with Extra Life on his participant page. You can also join Joey on the official Extra Life Twitch Stream, Thursdays -7-9pm EST.