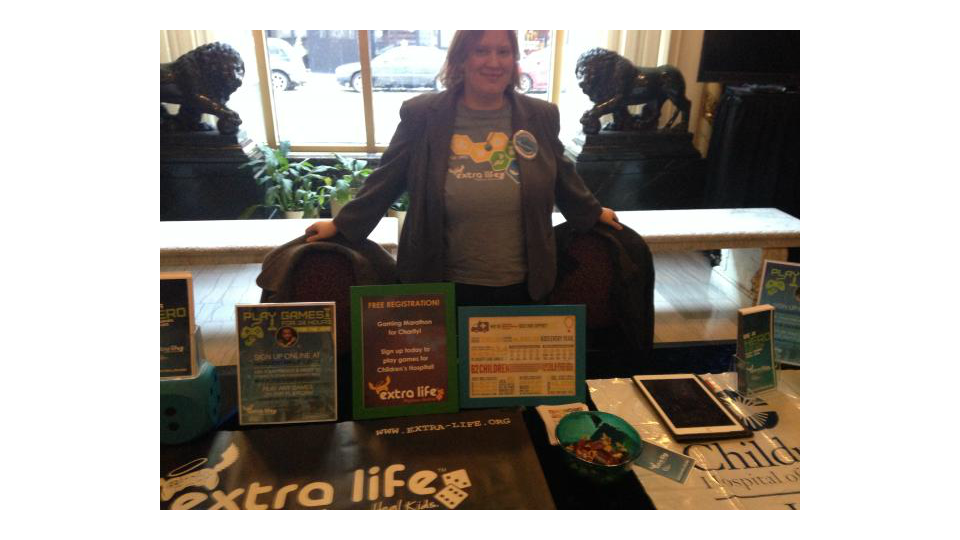 Only Extra Life, but I do it all the way. I run a team, I’ve been involved with guild leadership since 2013, and I don’t think I’ve gone more than a single day without talking about it since early 2015.

I’ve always tried to be involved with volunteering in some way. In high school I was always spending my weekends helping at the local animal shelter, in college I was part of a free tutoring program for grade-schoolers, and even beyond that, I worked for non-profit organizations when I could. These days, Extra Life is my big passion, though I do still occasionally donate to other worthy causes, like local food banks and library associations when I am able.

I don’t really think there was a specific moment unless you count the “Aha” that came from hearing about Extra Life to begin with. It was just something that clicked. It kind of fell into place and made sense for me and my husband. It was not only a great cause, but we were a little new at the whole ‘adulting’ thing, and it seemed like a good way to bring our gaming obsession into our adult lives.

I think one of my favorite things that has helped my fundraising is the semi-annual pepperoni roll sale I do at work. My co-workers rave about my baking, and people actually go out of their way to reserve them so I’m able to make enough.

Other than that, I just kind of use my social media to set random conditions for myself as I think of them. My big one last year was to sit down and play Dread Halls on the Oculus Rift if I hit a certain amount. I’ve been putting that one off, because a.) I have no idea what I’m doing when it comes to recording something like that, and b.) I’m one of those scaredy-cats who thinks “Don’t Starve” is too scary.

I know I’m going to have to make good on my promise soon though, and I’m sure watching me freak out will entertain plenty of people when I finally figure out the logistics.

Well the top three on my list would have to be Extra Life United 2017, 2016 and 2014. It’s an amazing experience, and hard to describe in just a few short sentences. So all I’ll say is that the tournament isn’t the biggest reason to go, and if you have the opportunity to go, DO IT. It will seriously change your life.

One thing I’ll never forget. I was staffing an Extra Life table with my husband at an event where we had tables set up for board games. A young man who happened to be deaf walked up and wordlessly indicated he’d like to play Settlers of Catan. When we asked if he’d ever played, he shook his head ‘no.’

Now, neither my husband or I know sign language, but I’ve always believed in the power of gaming to bring people together. So between demonstrating the game and scrawling questions and answers back and forth in a spiral notebook, we managed to not only teach him how to play, but all three of us had a great time. I never even caught his name, but his deeply genuine smile and gratitude is something that will stay with me for a long time.

I think my biggest successes so far have come from my involvement in the Extra Life Pittsburgh Guild. I like to hope I was instrumental in forging an alliance with our local anime convention which I’ve attended every year for about 15 years.

Since we first started having an Extra Life Guild presence there, we’ve managed to expand each year, and every year the response from their attendees gets better and better. It’s been a pleasure to work with them and watch our relationship grow from a single table in an out of the way hallway, to a huge presence in their huge gaming hall.

Thank you Kate! You can support Kate and her endeavors with gaming for charity on her Extra Life participant page.