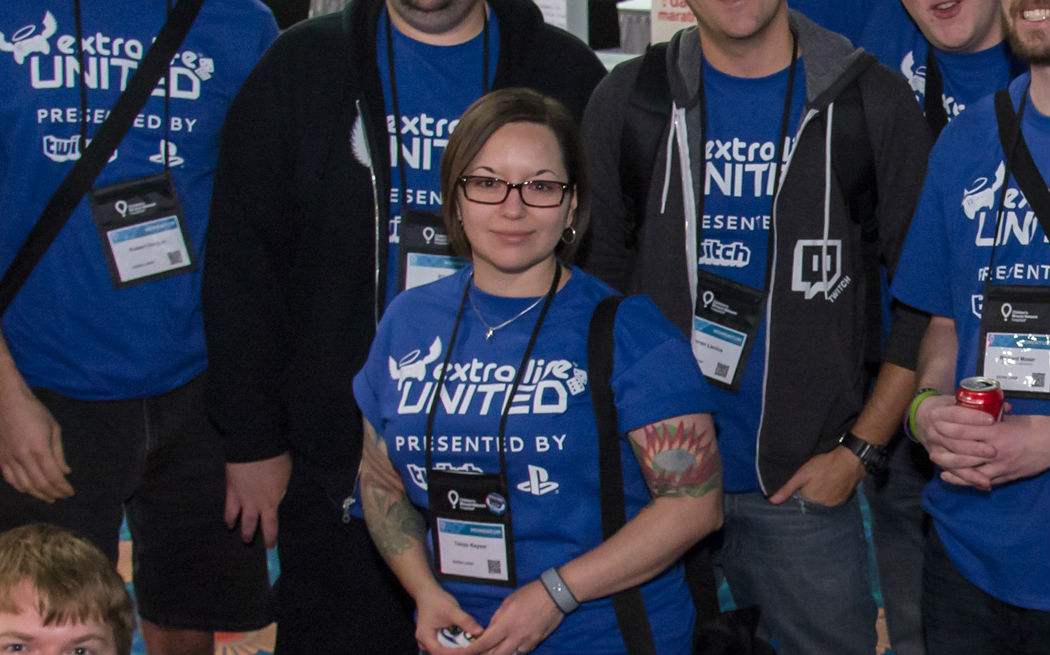 Tanya Keyser is a mom, a Sharepoint master and an Extra Lifer. Though you won’t see her glued to a controller. She is RackerGamer’s Project Manager. If she doesn’t already have the title “Chief Cat Herder”, she should.

I met Tanya in 2014 at Extra Life United, the first gathering of Extra Life participants in a tournament, playing for thousands of dollars to be awarded to Children’s Miracle Network Hospitals. I had a chance to talk to her recently about her experience with Extra Life

Not a Gamer? No Problem

“What’s different about the way I came into Extra Life is that I actually don’t consider myself a hardcore gamer. I don’t play PC or Console games, if I do play games it’s the more traditional tabletop games. I like to get the family around the table and play Monopoly. Let’s see how angry we can get with one another,” she laughs. “My son says Monopoly destroys families and that’s why it’s his favorite game. My son has always played games with his dad. We always had that battle. You have games at your dad’s house and at mom’s, you have books.”

Tanya works for Rackspace, a leading cloud management company. In 2013 she wanted to get involved with something. At Rackspace there is a saying that exists  in the company’s charitable foundation. One that resonated with her. They ask for your time, your talent or your treasure.

“When I found out about Extra Life in 2013, I was looking for something to get involved in. I heard there was a group of  gamers who put on a charity event. So I sent them an email, asking I could sit in on this meeting. They said sure, no problem. This was about 30-40 days out from the 24 hour marathon and live streaming event with Extra Life staff on-site. So I went to this meeting and really it was their first planning meeting for the Game Day event in 2013.”

This was the first year however that it was going to be a much bigger event, using event space made available by Rackspace (RackerGamers are an employee driven group, not an official Rackspace team). During the meeting it became evident that Tanya could help organize. She found her way to give her talent, which inevitably led to her giving her time.

“The Extra Life staff came onsite to the event center in 2013, so not only was it was my first experience with Extra Life, but with the Extra Life staff. I saw how passionate they were and what an undertaking this was every year, and that really solidified my commitment to Extra Life.”

During Tanya’s first Extra Life event Rackspace Co-Founder and Chairman, Graham Weston approached her as she was wearing the “housekeeping” hat during the event.  “He asked ‘Are working right now?’ and I said ‘yes’. He then said, ‘No, are you housekeeping or are you participating in the event?’ and I said ‘yes’. He then asked me if I could help him with something.” Weston wanted to be sure that RackerGamers came within $1,000 of their goal of $25,000, but with the promise that they would get that last $1,000. Weston donated over $8,000 while Tanya spent an hour distributed the funds across various members of the team. They made it to their goal of $25,000, and then exceeded it, earning $27,000.

A Family That Plays Together…

“Once I realized how passionate the staff was and the community, I found all of these other benefits. It’s always been a bit contentious with my son, he’s 20 years old now, so it’s not a big deal, but Extra Life allowed me to be involved with the gaming community in a positive way. My son talks about it every year.”

It became a family affair. Tanya, her son, her fiancé and his children all participate in the 24 hour marathon in some capacity. Even though she is not a gamer, she still participates. “My first year, I didn’t sign up to participate because I thought, I’m not a gamer. But my second year I decided to play some tabletop games and raised $500, this year I said well I can do more, how about $1,000?” A family that games together stays together. The experience Tanya had at Extra Life United left it’s mark. So much so that she is bringing her fiancé and her son to compete in the charitable competition and her son’s girlfriend as support. Extra Life became a bridge between gaming and the spirit and action of charity.

The event hosted by RackerGamers has an increasingly broader scope. Game Day draws up to 300 participants, and this year. the event is open to the public. That number is likely to grow. “You can do your part, it’s wide range. You play dominoes with your grandma on Sundays? Great, bring her into Extra Life. We’re going to take all types.”

Tanya’s role as Project Manager for RackerGamers (which quickly becomes a second job), focuses on securing space, planning, organizing and coordinating schedules.  But it becomes more than an event and space. The intention is to now create an experience like that of Extra Life United. “The idea of going to a place by myself and meeting 60 or more people I didn’t know was overwhelming. But being there really drove it home. We have this really small part, but we are doing amazing things for people.” Using Extra Life United as inspiration to create a communal event is key. Carrying and pushing that energy through the attendees, but remembering you have a larger goal in the midst of the fun. “We can visit the hospital and see the kids we are helping. We are having an actual impact.”

“I’ve been behind the scenes helping where I could. But this year, and especially after ELU, I realized there are probably other people like me who wondered if they had the right to register for Extra Life, or if they fit into that role. And the answer is YES. Of course we do! Even if we’re not a ‘gamer’ in the typical sense – we can all do our part by supporting Extra Life. So this year I’ve made a conscious effort to be more visible and outspoken about my Extra Life efforts and why I choose to be part of Extra Life My hope is that I can inspire others who may have doubts that they should definitely sign up and participate. We can all make a difference, one donation at a time.”

It can take just one person to make a change that can help others. Thank you Tanya for being the consummate BigHeartedGamer. You can support Tanya and her campaign on her participant page.

RackerGamers is a group of (mostly) Rackspace employees who enjoy gaming and the gaming community. Sometimes, we play to raise money for good causes. Since 2011, RackerGamers has raised more than $80,000 for Children’s Miracle Network Hospitals by participating in Extra Life (as Team Rackspace). We’ve seen our Extra Life team grow from 20-30 Rackers, to almost 200. We have the largest Extra Life team in San Antonio, and our goal this year is $51,200. We’d love it if you played a part in reaching that goal. You can find more information at http://rackergamers.org/.

On Saturday, November 7, you can watch our game day live stream at http://rackergamers.org/community/streaming/twitch-tv/ or directly on twitch at http://www.twitch.tv/RackerGamers.

If you’d like to make a donation towards this year’s Extra Life goal, you can donate to anyone on Team Rackspace at http://www.extra-life.org/team/rgel2015. If you want a chance at winning a vintage, working Atari system (with games!) you can make a donation on this page: http://www.extra-life.org/participant/davidbennett. (We’d also really love it if you find someone on our team who is at $0 raised and make a small donation to encourage them.) #ForTheKids!

Please note: This group is not sponsored by or affiliated as an Official Rackspace branch. We are simply a group of Rackers, friends, and family that have started a community of people with similar interests in playing games and helping others.