We are happy to share our first audio feature here on BigHeartedGamers.com. Enjoy our pilot episode and be sure check out Bee the Swarm.

It shouldn’t be too surprising, perhaps even befitting that a person who studies the stars has hopeful aspirations for terrestrial things. Rob Slaughter is a physicist for the Air Force. When he isn’t staring into space through an amazing telescope, he is helping others through gaming. His mobile app, Bee the Swarm, let’s people play free games, but with a charitable twist. Any and all revenue from in game ads and purchases go to a featured charity or cause. That’s 100%!  The premise is simple, together the swarm can achieve amazing successes. 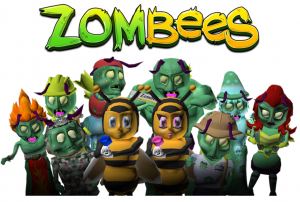 The team behind the mobile game, Stickman Trials, is on board with Slaughter. Their original title, Zombees, is a twin-stick shooter where the player controls one of four bees in order to blast encroaching undead “Zombees” and other creepy crawlies. In app purchases give the option to temporarily turn off ads and supply power-ups. They also have a version of 2048 (which is a clone of the mobile game 1024, which in turn is clone/version of the game Threes). The decision to create a Bee the Swarm version of 2048 came at the behest of the charities trying to annihilate the hoards of undead bees with little success. Beyond Zombees and 2048,  the team has plans of having at least a half dozen or so more games this year.

Bee the Swarm functions on crowdfunding and eventually will take some revenue from Bee the Swarm branded merchandise. At the time of this writing, the company is in the midst of a Kickstarter campaign in hope of getting the support to continue making games. The more games they have to offer, the broader the appeal, thereby helping impact more charities and people in need.

Are you “doing good through gaming”? Want to talk about it? We would love to have you on our podcast! Contact us on Twitter or drop us a line.